Tell me a bit about your career up until this point?
I’ve been writing fiction for the past ten years and am currently an MFA candidate at The New School in Manhattan. Until How to Train Your Virgin came along, my work has not involved a great deal of sex – nor magical realms.

Was writing this book a logical next step for you?
No way. It was the most illogical thing in the world, and that’s why I did it. There I was, struggling away at a literary novel under the scourge of a mentor with an approach to fiction-editing reminiscent of that movie Whiplash, when a friend said, hey, you’re a fast, amazing writer, want to write erotica for Paul Chan’s publishing company? I respond to flattery.
When the artist Paul Chan approaches you to write a book for his publishing company, Badlands, you do it. And because it was to be written for fun, and under a pseudonym, I was able to have as much fun with it as I possibly could – with no Whiplash-professors leaning over my shoulder telling me how and what to write.

Tell me about your process writing for „New Lovers“.
Writing smut was entirely liberating. I suggest everyone sit down and write some. See what comes out – don’t edit yourself. Critics do not belong in your head and they definitely don’t belong in your sexual imagination. So here was my process – sit down in my bed (it’s not what you think, my bed is where I work on everything from bills to the “normal” novel) and write a first chapter with absolutely no plan. The first chapter of How to Train Your Virgin is what came out.

My lover, Laszlo, weighed in on the sex scene that night. I feared he might protest against my writing erotica at all, but instead he was incredibly enthusiastic and supportive. He even suggested the bit where the king picks the queen up and er, slides into the Vine Girl beneath her. I said “you are a genius,” and took him to bed right then and there. The moral? Every writer, even a smutty, dirty writer like me, needs feedback.

What were your inspirations and resources? From other books/authors, to friends and movements.
Everything. If I answered this question tomorrow I’d name different influ- ences I’m sure. My Queen is a sort of forlorn version of me, I suppose. She’s bisexual, often melancholy, and fears change. Not that I’ve ever plotted to deflower any hipster virgins or fucked a Centaur. Hah.

Her realm came from several places – Greek mythology of course, the mysterious environment created by in the play ‘Sleep No More’, the sense of infinite worlds in Ian M. Banks science fiction novels, and of course, the dramatic voice Joyce Carol Oates brings to all of her novels.

As for the sex scenes? Those were constructed in the least sexual way you can imagine. I read a lot of erotica, something I’d never done before, and made sure I hit all the bases in my sex scenes: you know, clitoris, clitoris, clitoris, vague sense of guilt mingled with desire, breasts, cock, taint, blah blah. Reading it now I’m happy to see that it all came together so seamlessly. The main component of the sex scenes however is not physicality: it’s the intense, conflicted emotions going through the characters. I found that generated the most sustainable dramatic heat.

By the way, it’s not that all these fantastic locales are the ultimate turn-on for me – my queen explores, exhausts and kind of rejects them – learning that lording over a realm of sex without love is really a life sentence, something anti-human and sad.

In history, erotica has been shunned, only to be canonized later in life (Lady Chatterley‘s Lover). Do you think our society is ready for erotica?
Yes, it’s ready. Female sexuality is a complicated thing – everything on the matter hasn’t been said yet, and the more diverse voices we have willing to risk the disapprobation of society by expressing themselves, the more we learn about it, the more we inspire each other. The world is saturated with pornography, which focuses on the slap and tickle, the goal, the climax, the disembodied pieces that fit together, if you will. I think the turn-on of erotica is that it is emotional, situational, relational (to steal a word from Paul Chan), and endlessly, originally complicated. Erotica focuses on the interiority of desire and attraction and pleasure, rather than just the exterior. Erotic expression and erotic literature have long existed, but they are of growing importance in our society because human expression is even more critical in a world of kaleidoscopic dating (Tumbler, Grinder) and endless porn-on-tap. In a way that’s what my novel stands for: the notion that new, fantastic sexual entertainments can be interesting for a while, but it’s the world of human emotions, including suffering, aging and death, that are ul- timately important.

50 Shades of Grey didn’t get female sexuality right or wrong, but it shouldn’t matter if it did or not. The world’s mistake is taking 50 Shades’ content and its success to mean something so very grave and significant. Though it became wildly popular, we must remember that it was one woman’s voice and it should be allowed to exist on that level – as entertainment, not cultural criticism. I believe that 50 Shades was popular not because of the type of sex that it showcased, but because it mingled sexual situations with a classic fairy-tale princess story, a sort of beauty and the beast, with a happy ending. It served up its bit of naughtiness in a suddenly social-acceptable medium, and the whole thing snowballed.

My novel doesn’t get female sexuality “right” or “wrong” either, and I’m certainly not making a sweeping statement about women. If it were to become an international best seller I suppose people would bemoan it as well. It’s just one story in a sea of stories – much like female sexuality and female sexual fantasy – which are as diverse as snow- flakes. Sorry for the cliché. One thing is certain – the more women contribute their small, unique voices to sex writing, whether it’s good or bad or well-written or not, and the more their voices are read, than the more the whole concept of women enjoying sex and getting creative with it will be palatable.

Over all I say congratulations to EL James for making a killing in her chosen field.

These books are provocative. What are you hoping to provoke? Trembling pussies I suppose. Sexuality, female sexual fantasy, female sexual play, is complicated and tied up with our identities.

What, would you say, is How to Train Your Virgin about? Using fan- tasy is a great way to a hold a mirror to quotidian society. What were you trying to reflect with this fantastical and erotic world?
How to Train Your Virgin is at heart about the ways in which we try to save ourselves pain. The queen of my novel tries to prevent her husband’s infidelity in the darkest way imaginable, by setting out to destroy the objects of his lust. It’s crazy yes, but then men and women do crazy things for love every day. While she tries to get into the heads of her little hipster targets she fails again and again – not just because they have their own bizarre, very human problems that hinder her progress, but because her body and her emotions betray her again and again. Nothing is simple in love or sex, and I wanted my erotica to highlight the tension between fairytale endings as says, Disney or EL James portrays them, and the reality of romance and sex.

This is a great article about the New Lovers books, specifically about the first three of which How to Train Your Virgin was one.

Excerpt: (a not entirely loving one, but that’s all right, it’s erotica, not literature. 🙂 And really, this just makes all those nightmares I had in MFA grad school about my sexual performance being workshopped by a class — more real than ever.) :

“The first in the series, How To Train Your Virgin, by the pseudonymous Wednesday Black, takes place in a fictional landscape separated from our own by human dream space. Its queen is the book’s narrator.

There, physical laws depart from our own (the populace is immortal, and we see the bodies of its members slip mercurially between chosen and natural forms) but the organic elements that make up the book’s visual register are nonetheless recognizable: dogs, birds, eggs, trees, flowers, fields. There is a vine girl (“a willow tree made female flesh”) and a vine man (“a hoary chap with face almost entirely occluded by the vines that grow from his skin. His body is shaggy with tendrils and leaves, and at the base, the thick genitals are petrified erect”); a “Baby Garden” where trees bear “orbs made up of curled fetuses of all species—fairies and nixies and gnomes, winged piglets, bearded unicorns, toothpick-haired unicorns”; a ghost woman with a leopard’s head and an “athlete’s body” that’s “Amazonian in its hardness”; and a centaur, whose species is described as “loyal creatures, being made of the stallion’s lust and the man’s intelligence and deliberation.” And there are others. As you can imagine, these bodies are all introduced in order for them to have sex with each other. And remarkably, despite their radical structural deviation from human bodies, they somehow fall under the very human hegemony of penis-in-vagina, mutually orgasmic sex.

The novel’s plot is motivated by the narrator queen’s desire to sabotage an affair her husband, the king, is on course to pursue. The targets of his affection are two human virgins – one male, one female – and the queen tries desperately to reach them before he can, in order to take their respective virginities and, in turn, nullify their appeal. Normally, she can reach the humans during their dreamtime, though with M – the girl – her attempts are “stymied by tinctures for depression, anxiety, suffering,” which prevent uninvited nighttime visitors. Peter – the boy – “does not take pills of forgetfulness” but rather dreams nightly of his memories of an unplaced war zone where “rockets crash, women shriek under the rapine attention of beings of clotted ash and fury,” and this trauma keeps the queen at bay. However, she manages to reach the virgins when they are vulnerable – Peter when he is sick, M when under the influence of MDMA.

The prose is peppered with structural and lexical anachronisms in the vein of “I run from the Hall and through the moors to the borderlands where the Realm gives way to a sandy, bemisted void.” It has the same effect as listening to characters in fantasy movies and television shows set in ancient or alternative worlds who uniformly have British accents and a formal syntax: that someone is awkwardly trying to affect aristocratic class or status through their proximity to history and archaic usage. It seems that even in fantasy, there’s a limit to what can be imagined…” — Tess Edmunson, C Magazine

Thank you, Krystal Ball for having me and Paul Chan on your show to talk about the New Lovers erotica series. We had a blast, even if my face was twitching uncontrollably. 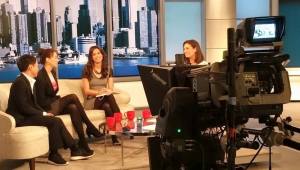 oh. And there’s also this trailer for How To Train Y.our Virgin. LOL 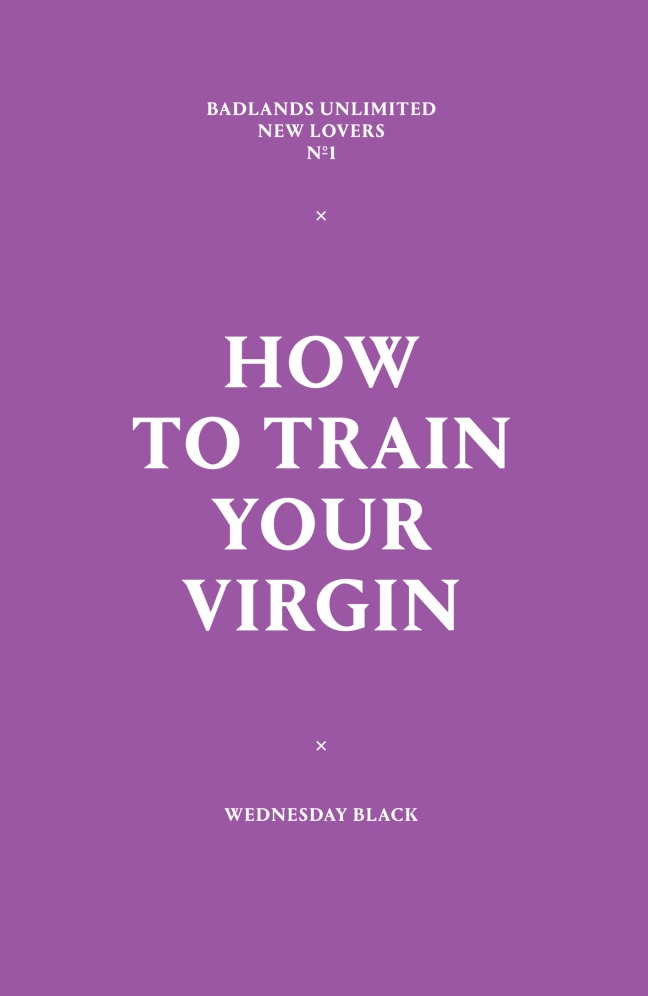 Buy How to Train Your Virgin today!
It’s funny. It’s feminist. And it’s awfully gross. But you might get a baby rise out of it. Buy today.

Also, what do you think about the slut-shaming of erotica writers? I’m growing some theories on this topic!

Don’t forget we have a historic book launch on March 10, 2015, at the Guggenheim Museum.